About Muse Wine | Winemaking at its Best

About Us: An Award-Winning Winery in Northern Virginia

The Lure of Wine Making 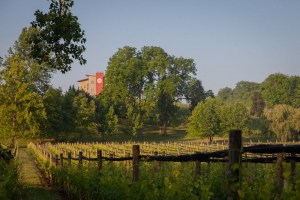 Sally Cowal says, “The improvement in Virginia wines over the decade before we arrived had been remarkable. When I was working in the State Department in the early nineties someone had the bright idea of serving Virginia wines in the diplomatic dining rooms. After all, Virginia was just across the Potomac River and the dining rooms looked out in that direction. Could there be any better way to impress a visiting French diplomat? Well actually, yes. It would not be too far- fetched to trace back the decline of American diplomacy to that baleful decision.”

“Muse Vineyards was far from the first to plunge into the great Virginia wine experiment. There were some forty vineyards in the state when we arrived, and a lot of thought and investment had already gone into Virginia wine. But we have played our small part in pioneering the introduction of grape varieties. Acquiring our original toy vineyard of six hundred vines was like getting a puppy from the pound – there were no pedigree papers. We could work out that there was some Merlot, but we had no idea which Merlot clone we had. By the time we started planting new vines in 2006, we had ideas about which grape varieties and which root stocks were likely to be appropriate. We chose low-vigor root stocks which ensure the vines concentrate on producing ripe fruit rather than leaves and French certified vines with the specific characteristics of low production and the small berries and clusters we were looking for.”

Robert Muse explains, “When you plant a Cabernet Sauvignon clone it will be an exact replica created originally from a cutting of a vine selected perhaps two or three hundred years ago for a specific attribute, the quality of its fruit, its ripening characteristics, its resistance to disease and so on. Therefore, when you select a particular clone (say Cabernet Franc 214), you are another link in a long chain of winemakers.

“A lot of clonal selections are bred to produce big crops. A few—and these are the ones that we use at Muse Vineyard—are best for fine wine making, produce very small grapes, which is important because it makes the ratio of skin to pulp higher. It’s the skin that produces the color, most of the tannin, and a variety of flavors.” 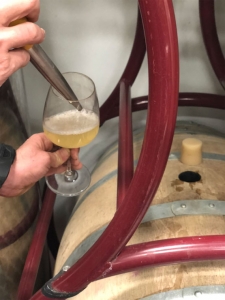 “While I haven’t gone as deeply into the science of wine making as Robert, I have been pretty hands on from the start,” Sally adds. “We were just getting ready for our first big planting of thousands of vines in 2007 when Robert had to make an emergency trip to Cuba and left me to sort it out with a pick-up crew. The first day it started to rain, and it didn’t stop. I was sloshing around in high wellington boots and the tractor kept getting stuck in the mud. ¿Señora, que hacer? How the hell would I know? In fact, my most useful skill in all this – apart from having drunk a lot of good wine – was that I spoke Spanish. But I needed the maestro and because of the embargo, Robert was beyond the reach of communications in Cuba at that time. So, we just got on with the planting as best we could. When eventually I got hold of Robert he couldn’t believe I hadn’t waited until the weather dried up! We produced the first wine we could be really proud of in 2009, our signature Bordeaux blend Clio. This was from the vines planted in thick mud under my supervision!

“But we are not finished yet. We are planting additional vines, recently including the bright, red Teroldego from Northern Italy.”

Sally goes on to say, “I love being involved in agriculture even more than I expected. I have developed a huge respect for farmers and the risky lives they lead. Viticulture is a delicate enterprise, but a corn farmer can just as easily be wiped out for a season by drought as we can by late frosts. What makes viticulture different is that it is highly labor intensive. Each vine requires several minutes of attention a year, where mechanically planted and harvested corn needs as little as one hour a year of labor per acre.”

Muse says, “I have had a romantic conception of vineyards at least since I was thirty. As a lawyer, I have had probably too much involvement with Congress and the executive agencies in Washington, D.C. to be the sunniest of life’s optimists. The idea of agriculture, of rural life, seemed a lot cleaner. I didn’t like the idea of livestock, having grown up around animals on a small ranch in Arizona. That’s a twenty four-hour day, cows birthing at midnight sort of thing.”

“Wine grapes grown on small estates offer the potential to produce something of exceptional quality, by which I mean something non-industrial; something purely local. Something that channels the place of production, everything from the geology to the weather to the methods employed in the vineyard – into that ‘something’ I keep saying – which is great wine.”

“At Muse Vineyards, we have grown twenty different grape varieties,” says Robert Muse. “So, no one could accuse us of being risk averse – though time has demonstrated in a couple of instances we should well have been.”

“At Muse Vineyards, we have grown twenty different grape varieties so no one could accuse us of being risk averse – though time has demonstrated in a couple of instances we should well have been.”– Robert Muse

More About the Grape Varieties at Muse 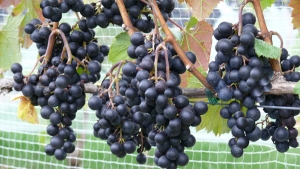 “For instance, the Tannat grape, which is important in south-west France, was widely promoted for Virginia vineyards, and I bought into it. My Tannat vines died the first really cold winter. Syrah has also been a disappointment. Both have been replaced. We are not even a quarter of the way to understanding what Virginia’s great strengths in wine might be. So, all remotely rational ideas on what to plant are open for discussion. In fact, I have had great success with Rhône varietals, Roussanne for white wine and Grenache for red. “

“Whether they do well in the long term remains to be seen. The Grenache vines struggled through the severe winter of 2013-14.” While the objective has always been to create a commercially viable enterprise, in its first decade Muse Vineyards still resembles an experimental, research station. “The goal has been to find those grape varieties that will flourish in the Shenandoah Valley; produce wine to the taste of the proprietors and public, and keep us out of bankruptcy court,” he says. “We have been successful in our professional careers, and that has given us the latitude to experiment. We didn’t have to plant high-yielding varieties and rush into wine production and sales as fast as possible to repay a bank. We’re lucky and we’d like to share our luck with wine lovers everywhere.”